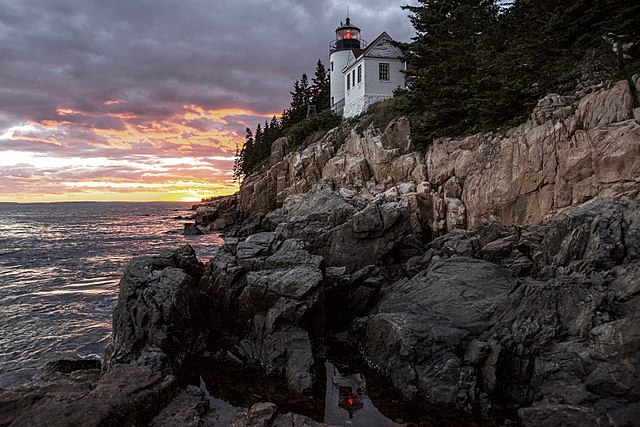 Exploring coastal Maine in 1604, Samuel de Champlain renames the area Isle de Mont Desert.  The land will not stay in French hands and is eventually ceded to England.  The first recorded summer visitors come to the island in 1855 and in 1901, the Maine Legislature grants a charter to acquire land in the public interest.  Thirteen years later, 5,000 acres have been donated.  Charles Eliot, his father and George B. Dorr (the Father of Acadia National Park) advocate for a park.   Woodrow Willson creates Sieur de Monts National Monument on July 8 1916.  The National Park Service takes over administration.  Then, on February 26, 1919, to honor the Marquis de Lafayette, the park is renamed Lafayette National Park.  Changing names yet again, Acadia National Park begins welcoming visitors on January 19,1929.

Today, Acadia NP is the oldest national park in the United States, east of the Mississippi River and the only one in the Northeast.  It encompasses over 49,000 acres on Mount Desert Island, Isle au Haut and on the Schoodic Peninsula.  Each year over 3.3 million people explore 26 mountain peaks, over 100 miles of hiking trails, and 45 miles of carriage roads in this diverse park.

Arthur Stupka was the first naturalist at Acadia and the first in any of the Eastern National Parks.  He joined the park service in 1931 at Yosemite NP and then in 1932, moved to Acadia.  One of his publications is "Nature Notes form Acadia".  After three years here, Stupka moved to the Great Smoky Mountains NP and continued his work as a naturalist.