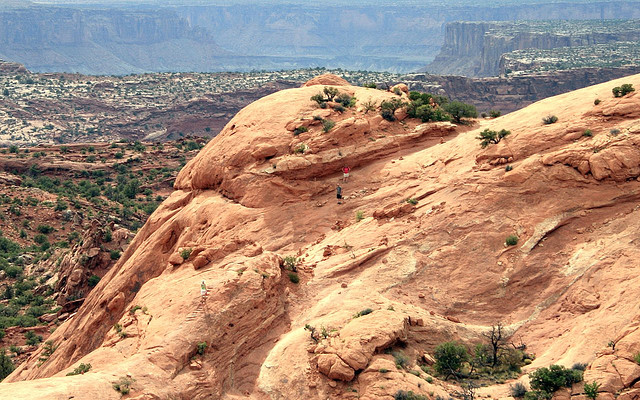 Canyonlands National Park is located in southeastern Utah near the town of Moab. The park is divided into four districts: the Island in the Sky, the Needles, the Maze, and the combined rivers—the Green and Colorado—which carved two large canyons into the Colorado Plateau. In each of the park's districts, the remarkable effects of millions of years of erosion on an orderly landscape of sedimentary rock can be seen.  Upheaval Dome is quite a different story.  Upheaval Dome is an impact structure, the deeply eroded bottom-most remnants of an impact crater.  Some scientists believe Upheaval Dome was created from Paradox Formation salt bed movement, creating a salt dome, but more modern studies show that the meteorite theory is more likely to be correct.

People have visited what is now Canyonlands National Park for [thousands of] years.  The area was once home of the Ancestral Puebloans, of which many traces can be found.  The Ancestral Puebloans left petroglyphs, most notably on the so-called Newspaper Rock near the Visitor Center at the entrance of this district.  A geographically detached section of the park located west-northwest of the main unit, Horseshoe Canyon Unit, contains panels of rock art made by hunter-gatherers from the Late Archaic Period (2000-1000 BC) pre-dating the Ancestral Puebloans.  Before the ancestral Puebloans left, other groups appeared in the area. The Ute and Paiute cultures may have arrived as early as 800 CE. The Navajo arrived from the north sometime after 1300 CE. All three groups still live here today.

The rich and colorful history of Canyonlands is perhaps best told by the individuals who witnessed it. As told by [the Native Americans], cowboys, scientists, park rangers, and former government officials.  One government official was Bates Wilson, the superintendent of Arches National Monument in the 1950s.  He began exploring the area to the south and west of Moab, Utah. After seeing what is now known as the Needles District, Wilson began advocating for the establishment of a new national park.  Bates led government officials on jeep tours featuring lengthy talks [about the area].  Secretary of the Interior Stewart Udall joined one of these tours in 1961 and began lobbying Congress for the proposed park.  [Thus] on September 12, 1964, [Canyonlands National Park was established] when President Lyndon B. Johnson signed Public Law 88-590.