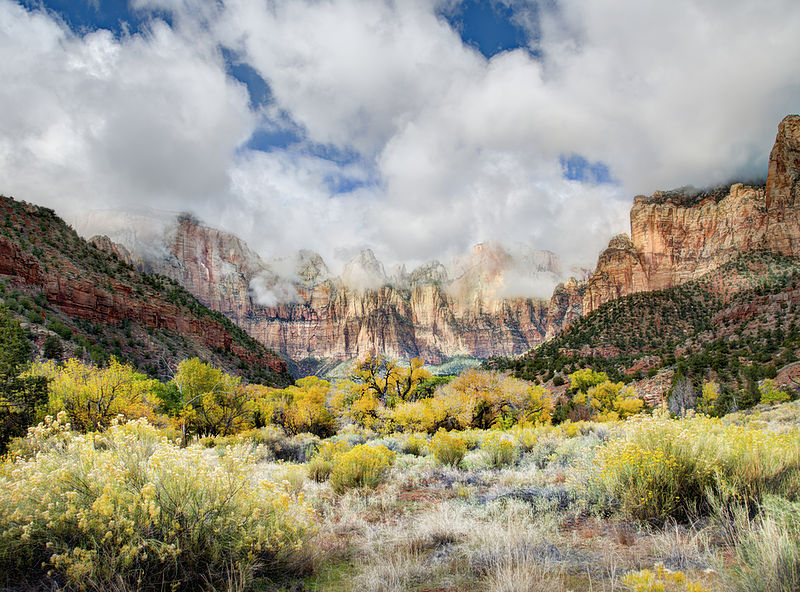 Zion National Park is an American national park located in southwestern Utah near the city of Springdale...Located at the junction of the Colorado Plateau, Great Basin, and Mojave Desert regions.  The rock layers [of Zion] have been uplifted, tilted, and eroded, forming a feature called the Grand Staircase, a series of colorful cliffs stretching between Bryce Canyon and the Grand Canyon. The bottom layer of rock at Bryce Canyon is the top layer at Zion, and the bottom layer at Zion is the top layer at the Grand Canyon.  The park [also] has...unique geography [with] a variety of life zones that allow for unusual plant and animal diversity.

Almost 12,000 years ago Zion's first peoples...tracked mammoth, giant sloth, and camel across southern Utah. Due to climate change and over hunting these animals died out about 8,000 years ago. Humans adapted by focusing on mid-sized animals and gathered foods. As resources dwindled 2,600 years ago, people [adapted again] to [fit the area]. Such a culture, centered on Zion, differentiated over the next 1,500 years into a farming tradition archeologists call Virgin Anasazi.

Zion's geology provided [Native Peoples] and later pioneer farmers a combination rare in the desert: a wide, level place to grow food, a river to water it, and an adequate growing season.  In 1847, Mormon farmers from the Salt Lake area became the first people of European descent to settle the Virgin River region...The floor of Zion Canyon was settled in 1863 by Isaac Behunin, who farmed corn, tobacco, and fruit trees...Behunin is credited with naming Zion, a reference to the place of peace mentioned in the Bible.  Paintings of the canyon by Frederick S. Dellenbaugh were exhibited at the Saint Louis World's Fair in 1904, followed by a favorable article in Scribner's Magazine the next year. The article and paintings, along with previous [works], led to President William Howard Taft's proclamation on July 31, 1909 that created Mukuntuweap National Monument.  In 1917, the acting director of the newly created National Park Service visited the canyon and proposed changing its name from the locally unpopular Mukuntuweap to Zion, a name used by the local Mormon community.  The United States Congress added more land and established Zion National Park on November 19, 1919 during the administration of President Woodrow Wilson.