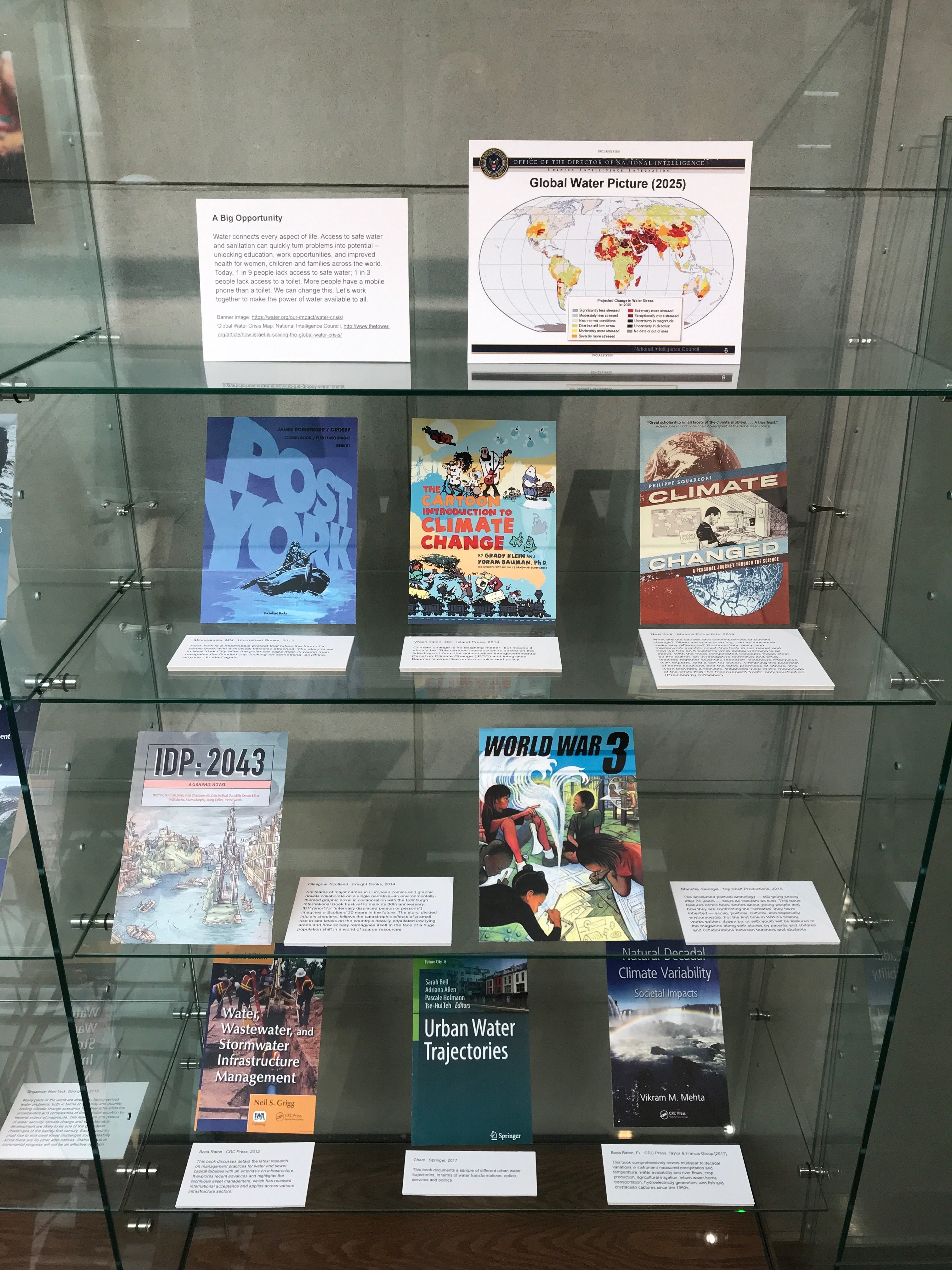 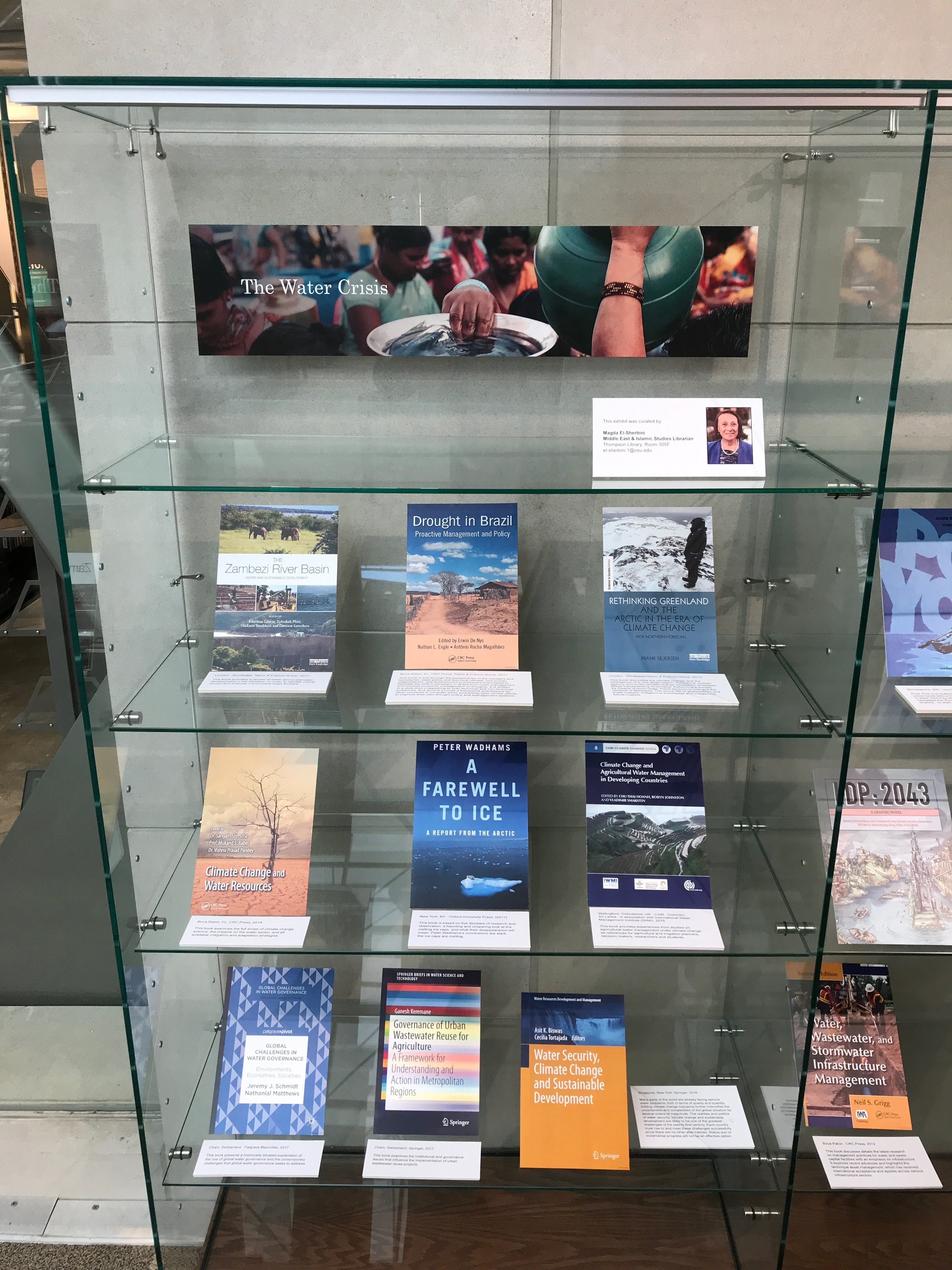 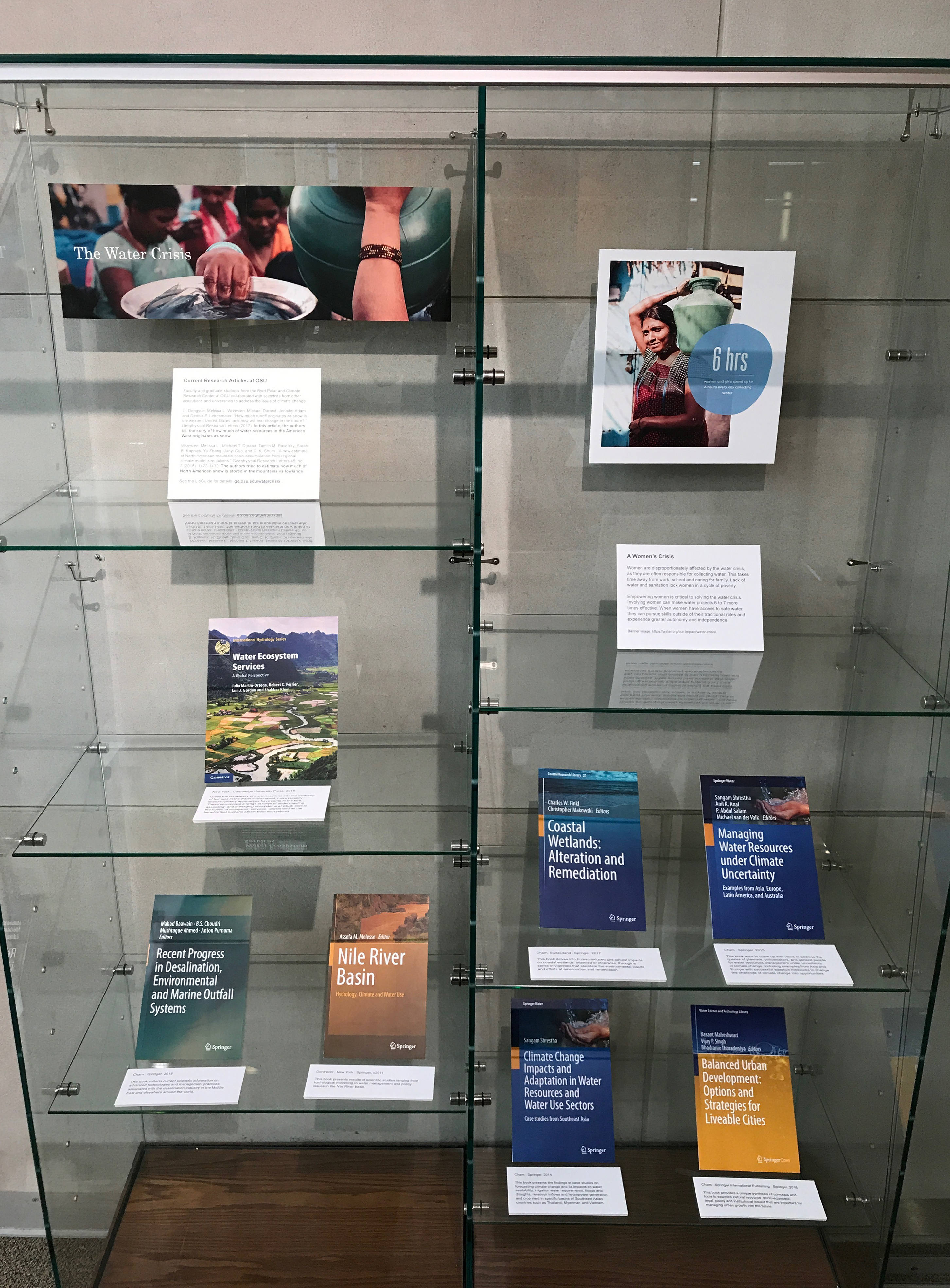 Li, Dongyue, Melissa L. Wrzesien, Michael Durand, Jennifer Adam, and Dennis P. Lettenmaier. "How much runoff originates as snow in the western United States, and how will that change in the future?." Geophysical Research Letters (2017).

This is a collaborative work by scientist from the School of Earth Sciences and Byrd Polar and Climate Research Center at OSU, and the Dept. of Geography at ULCA, Dept. of Civil and Environmental Engineering at the Washington State Univ. This paper tell the story of how much of water resources in the American West originates as snow.

Abstract: In the western United States, the seasonal phase of snow storage bridges between winter-dominant precipitation and summer-dominant water demand. The critical role of snow in water supply has been frequently quantified using the ratio of snowmelt-derived runoff to total runoff. However, current estimates of the fraction of annual runoff generated by snowmelt are not based on systematic analyses. Here, based on hydrological model simulations and a new snowmelt tracking algorithm, we show that 53% of the total runoff in the western United States originates as snowmelt, despite only 37% of the precipitation falling as snow. In mountainous areas, snowmelt is responsible for 70% of the total runoff. By 2100, the contribution of snowmelt to runoff will decrease by one third for the western U.S. in the Intergovernmental Panel on Climate Change Representative Concentration Pathway 8.5 scenario. Snowmelt‐derived runoff currently makes up two thirds of the inflow to the region's major reservoirs. We argue that substantial impacts on water supply are likely in a warmer climate. 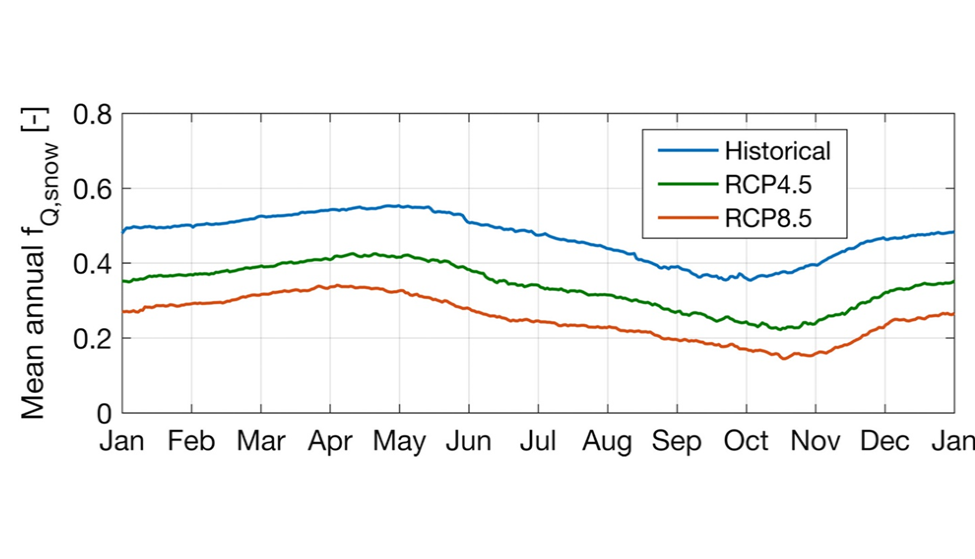 The mean seasonal for snow for the historical case and the RCP4.5 and RCP8.5 future climate scenarios. The length of the period between the annual peak for snow and the annual lowest for snow is prolonged due to the warmer climate, which shifts the snowmelt earlier and delays the start of the snow season. The earlier snowmelt onset and the overall declines in snow accumulation reduce the amount of the available snow water resources on which large areas in the West depend for water supply. 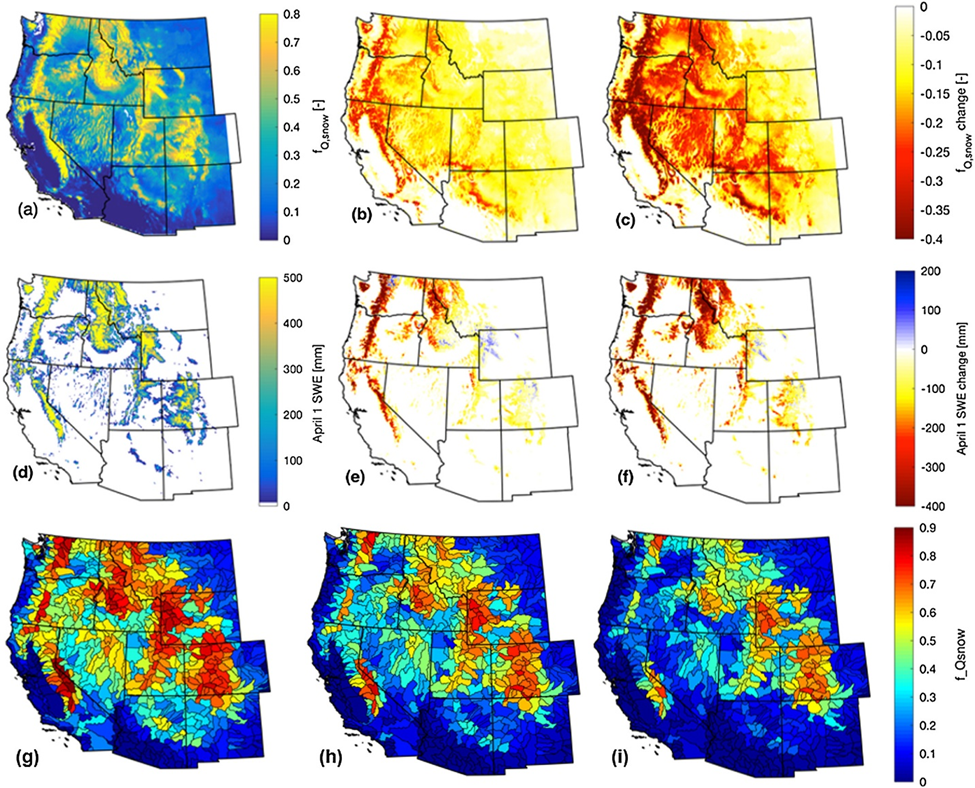 An estimate of how much of North American snow is stored in the mountains vs lowlands was addressed by a groups of scientists from School of Earth Sciences and Byrd Polar and Climate Research Center at OSU; Dept. of Geological Sciences, University of North Carolina at Chapel Hill; Geophysical Fluid Dynamics Laboratory, National Oceanic and Atmospheric Administration at Princeton; Institute of Geodesy and Geophysics, Chinese Academy of Sciences, Wuhan, China

Abstract: Despite the importance of mountain snowpack to understanding the water and energy cycles in North America's montane regions, no reliable mountain snow climatology exists for the entire continent. We present a new estimate of mountain snow water equivalent (SWE) for North America from regional climate model simulations. Climatological peak SWE in North America Mountains is 1,006 km3, 2.94 times larger than previous estimates from reanalysis. By combining this mountain SWE value with the best available global product in non-mountain areas, we estimate peak North America SWE of 1,684 km3, 55% greater than previous estimates. In our simulations, the date of maximum SWE varies widely by mountain range, from early March to mid‐April. Though mountains comprise 24% of the continent's land area, we estimate that they contain ~60% of North American SWE. This new estimate is a suitable benchmark for continental‐ and global‐scale water and energy budget studies 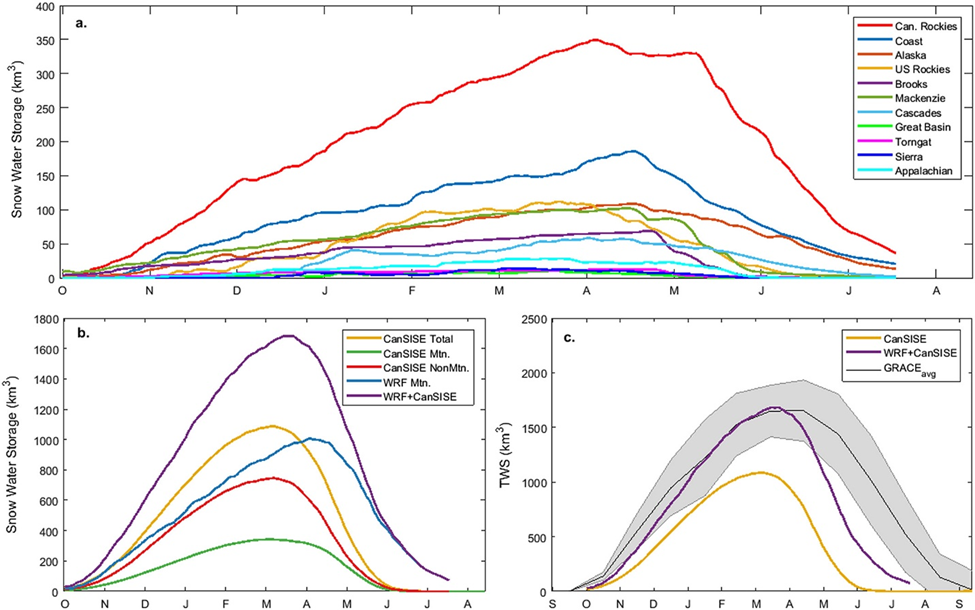 On a global scale, group of scientists from Hydrological Sciences Laboratory US, NASA Goddard Space Flight Center US; Jet Propulsion Laboratory US, California Institute of Technology US; and Dept. of Atmospheric Sciences, National Taiwan Univ. Taiwan.

Abstract: Freshwater availability is changing worldwide. Here we quantify 34 trends in terrestrial water storage observed by the Gravity Recovery and Climate Experiment (GRACE) satellites during 2002–2016 and categorize their drivers as natural interannual variability, unsustainable groundwater consumption, climate change or combinations thereof. Several of these trends had been lacking thorough investigation and attribution, including massive changes in northwestern China and the Okavango Delta. Others are consistent with climate model predictions. This observation-based assessment of how the world’s water landscape is responding to human impacts and climate variations provides a blueprint for evaluating and predicting emerging threats to water and food security. 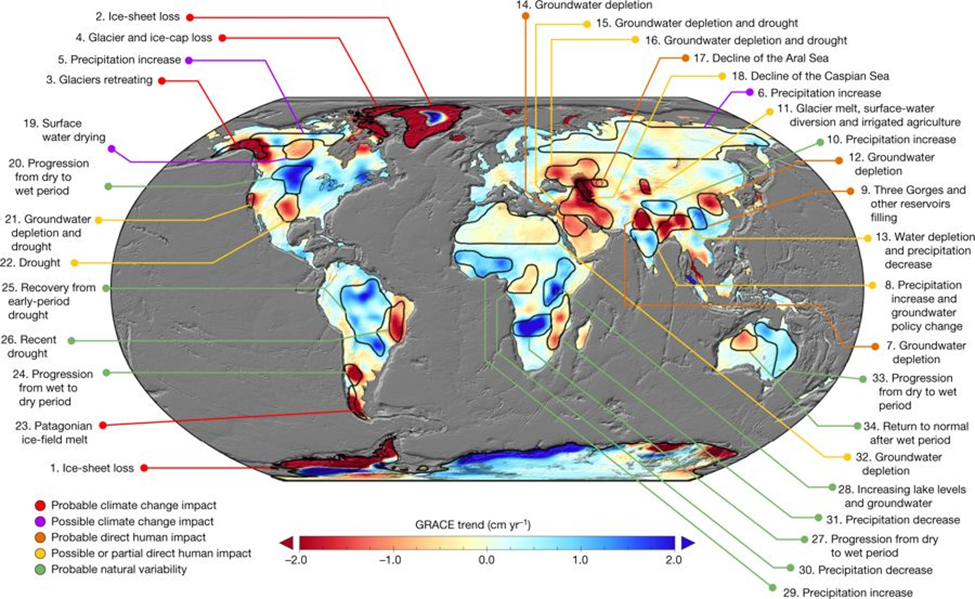 Trends in TWS (in centimeters per year) obtained on the basis of  Gravity Recovery and Climate Experiment (GRACE) observations from April 2002 to March 2016. The cause of the trend in each outlined study region is briefly explained and color-coded by category. The trend map was smoothed with a 150-km-radius Gaussian filter for the purpose of visualization; however, all calculations were performed at the native 3° resolution of the data product.

What is this searching? The OSU Library Catalog searches for print, electronic and other formats in the OSU Libraries collections. More Search Options >>

What is this searching? The OhioLINK catalog allows searching and requesting of scholarly materials located in the 90+ college and university member libraries around Ohio, plus the State Library of Ohio. More Search Options >>

What is this searching? WorldCat@OSU searches across 7 key databases for books, articles, and more. More Search Options >>

What is this searching? The SearchOhio Catalog allows searching and requesting of popular books, DVDs, CDs and other materials from 20+ public library systems throughout the state of Ohio. More Search Options >>