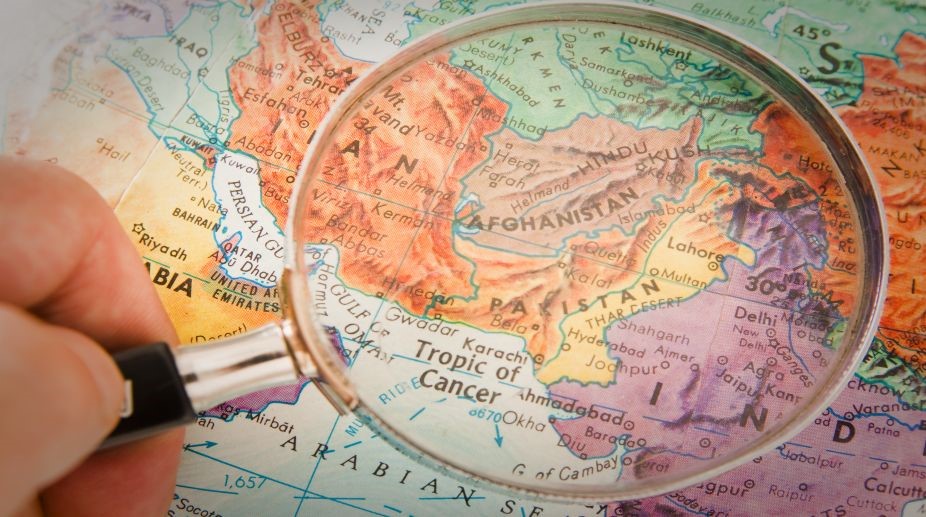 "The Great Game" was a political and diplomatic confrontation that existed for most of the 19th century between the British Empire and the Russian Empire over Afghanistan and neighboring territories in Central and South Asia. Russia was fearful of British commercial and military inroads into Central Asia, and Britain was fearful of Russia adding "the jewel in the crown", India, to the vast empire that Russia was building in Asia. This resulted in an atmosphere of distrust and the constant threat of war between the two empires.[1][2][3] Britain made it a high priority to protect all the approaches to India, and the "great game" is primarily how the British did this in terms of a possible Russian threat. Historians with access to the archives have concluded that Russia had no plans involving India, as the Russians repeatedly stated.[4]

The Great Game began on 12 January 1830 when Lord Ellenborough, the President of the Board of Control for India, tasked Lord William Bentinck, the Governor-General, to establish a new trade route to the Emirate of Bukhara.[2][3][5] Britain intended to gain control over the Emirate of Afghanistan and make it a protectorate, and to use the Ottoman Empire, the Persian Empire, the Khanate of Khiva, and the Emirate of Bukhara as buffer states between both empires. This would protect India and also key British sea trade routes by stopping Russia from gaining a port on the Persian Gulf or the Indian Ocean.[2][3] Russia proposed Afghanistan as the neutral zone.[6] The results included the failed First Anglo-Afghan War of 1838, the First Anglo-Sikh War of 1845, the Second Anglo-Sikh War of 1848, the Second Anglo-Afghan War of 1878, and the annexation of Kokand by Russia.

Historians consider the end of the Great Game to be 10 September 1895 signing of the Pamir Boundary Commission protocols,[7] when the border between Afghanistan and the Russian empire was defined.[8][9][10][11]:p14 The 1901 novel Kim by Rudyard Kipling made the term popular and introduced the new implication of great power rivalry. It became even more popular after the 1979 advent of the Soviet–Afghan War

The term "the Great Game" was used well before the 19th century and was associated with games of risk, such as cards and dice. The French equivalent Le grand jeu dates back to at least 1585 and is associated with meanings of risk, chance and deception.[13]

In the historical sense the term dated from the mid-19th century.[12] "The Great Game" is attributed to Captain Arthur Conolly (1807–42) who had been appointed as a political officer.[14] In July 1840, in correspondence to Major Henry Rawlinson who had been recently appointed as the new political agent in Kandahar, Conolly wrote, "You've a great game, a noble game, before you." Conolly believed that Rawlinson's new post gave him the opportunity to advance humanitarianism in Afghanistan, and summed up his hopes:[14]

If the British Government would only play the grand game — help Russia cordially to all that she has a right to expect — shake hands with Persia — get her all possible amends from Oosbegs — force the Bukhara Amir to be just to us, the Afghans, and other Oosbeg states, and his own kingdom — but why go on; you know my, at any rate in one sense, enlarged views. InshAllah! The expediency, nay the necessity of them will be seen, and we shall play the noble part that the first Christian nation of the world ought to fill.

It was introduced into mainstream by the British novelist Rudyard Kipling in his novel Kim (1901).[15] It was first used academically by Professor H.W.C. Davis in a presentation titled The Great Game in Asia (1800-1844) on 10 November 1926.[16] The use of the term "The Great Game" to describe Anglo-Russian rivalry in Central Asia became common only after the Second World War.

The Great Game – Article from Wikipedia

How The Great Game emptied the Pentagon.
The Guardian—US edition. March. 2011