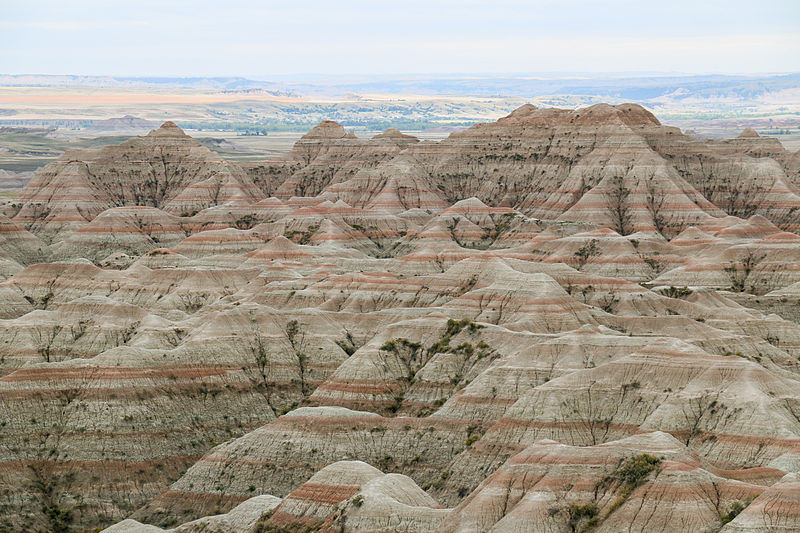 Badlands National Park is located in southwestern South Dakota. The sedimentary rock layers were deposited during the late Cretaceous Period, throughout the Late Eocene, and [into the] Oligocene Epochs...500,000 years ago...the Cheyenne River captured streams and rivers flowing from the Black Hills into the Badlands region...[causing] erosion to dominate over deposition.

The history of the...Badlands as a significant paleontological resource goes back to the Native American knowledge of the area. The Lakota found large fossilized bones, fossilized seashells and turtle shells. They correctly assumed that the area had once been under water, and that the bones belonged to creatures which no longer existed...[Archeological records, and] Native American's oral traditions [indicate that they have lived and hunted in the area for the past 11,000 years].

When homesteaders moved into South Dakota at the end of the 19th century, the U.S. government stripped Native Americans of much of their territory forcing them to live on reservations. In the fall and early winter of 1890, thousands of Native Americans became followers of the Indian prophet Wovoka. His vision called for the native people to dance the Ghost Dance...One of the last known Ghost Dances was conducted...[in] Badlands National Park.  As winter closed in, the ghost dancers returned to Pine Ridge Agency. The climax of the struggle came in late December, 1890...when they [were] overtaken by the soldiers near Wounded Knee Creek in the Reservation...Before it was over, nearly 300 Indians and 30 soldiers lay dead. The Wounded Knee Massacre was the last major clash between Plains Indians and the U.S. military until the advent of the American Indian Movement in the 1970s.  [Note:] Wounded Knee is not within the boundaries of Badlands National Park. It is located approximately 45 miles south of the park on Pine Ridge Reservation.

Badlands National Park [includes] the largest undisturbed mixed grass prairie in the United States, the sites of 1890s Ghost Dances, and Red Shirt Table, [which is] the park's highest point at 3,340 feet.  Authorized as Badlands National Monument on March 4, 1929, it was not established until January 25, 1939. Badlands was redesignated a national park on November 10, 1978 during the Carter Administration.