History of the Black Canyon of the Gunnison 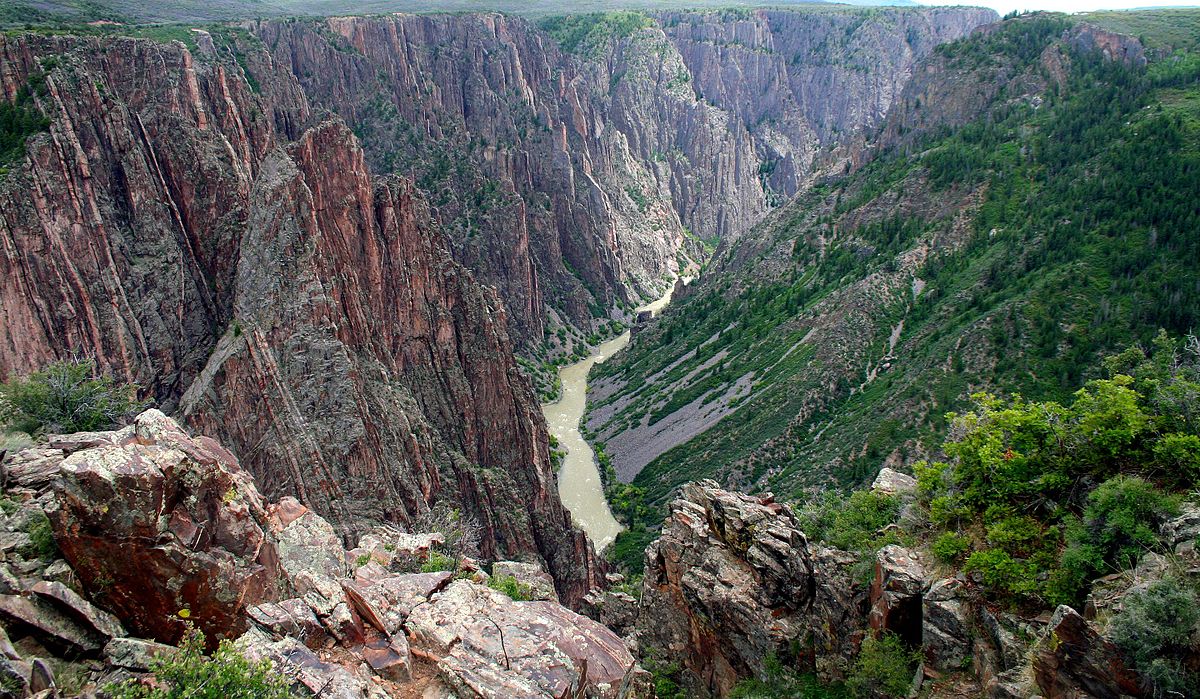 [N]o other canyon in North American combines the depth, narrowness, sheerness, and somber countenance of the Black Canyon...The park, located in western Colorado, contains 12 miles of the 48-mile-long Black Canyon of the Gunnison River. [It also] contains the deepest and most dramatic section of the canyon...[T]he canyon is made up of extremely hard] gneiss and schist...[that] formed...during a metamorphic period brought on by the collision of ancient volcanic island arcs with the southern end of what is present-day Wyoming. The lighter-colored pegmatite dikes that can be seen crosscutting the basement rocks formed later during this same period.  The entire area underwent [two] uplifts [which]... raised the gneiss and schist that makes up the canyon walls...[T]he river's flow was much larger than currently...[allowing it to dig] down through the gneiss and schist at the rate of 1-inch every 100 years. The extreme hardness of the metamorphic rock along with the relative quickness with which the river carved through them created the steep walls that can be seen today.

[This area of Colorado has been] long known to the Tabeguache...or “People of Sun Mountain,” [who were] the largest of the ten nomadic bands of the Ute and part of the Northern Ute People.  They traveled seasonally to the river valleys of the Gunnison River and Uncompahgre River.  The Spanish...[came] in 1765 when Juan Rivera’s band of explorers was looking for a passage to the California coast...[However] the first official account of the Black Canyon was provided by Captain John Williams Gunnison in 1853, who was leading an expedition to survey a route from Saint Louis and San Francisco. He described the country to be "the roughest, most hilly and most cut up," he had ever seen...Following his death at the hands of Ute Indians later that year, the river that Captain Gunnison had called the Grand was renamed in his honor.

In 1881, William Jackson Palmer's Denver and Rio Grande Railroad had reached Gunnison from Denver, [and] on August 13, 1882, the first passenger train passed through the Black Canyon.  The editor of the Gunnison Review-Press rode in one of the observation cars; he remarked that the canyon was "undoubtedly the largest and most rugged canyon in the world... We had often heard of the scenery of this canyon, but no one can have the faintest conception of its grandeur and magnificence until they have made a trip through it."  The Black Canyon of the Gunnison was established as a national monument on March 2, 1933, and was re-designated a national park on October 21, 1999 during the Clinton administration.