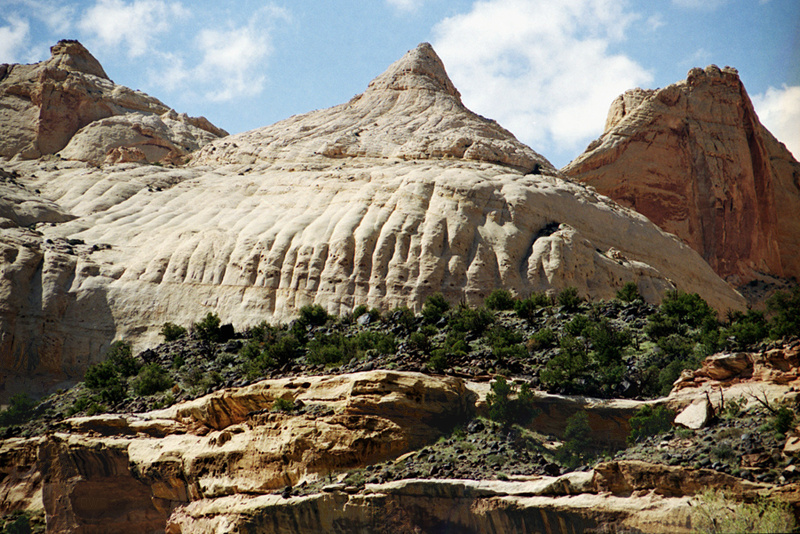 Located in south-central Utah, Capitol Reef was named for the white domes of Navajo Sandstone that resemble capitol building domes, and "reef" for the rocky cliffs which are a barrier to travel, like a coral reef.  The majority of a nearly 100 mi (160 km) long up-thrust formation called the Waterpocket Fold...is preserved within the park.  This Fold, a warp in the earth's crust that is 65 million years old,...is the largest exposed monocline in North America. In [it], newer and older layers of earth [are] folded over each other in an S-shape.

Fremont-culture Native Americans lived in the northern part of the Capitol Reef Waterpocket Fold around the year 1000.  In the 13th century, all of the Native American cultures in this area underwent sudden change, likely due to a long drought.  The Fremont settlements...were abandoned, [and]..the area [remained abandoned] for the next few centuries until the Ute and Paiute tribes occupied the region during the 1600s. Other tribes that have briefly occupied or at least passed through Capitol Reef include Hopi, Navajo, and Zuni.  In 1872 Alan H. Thompson, a surveyor attached to United States Army Major John Wesley Powell's expedition, crossed the Waterpocket Fold while exploring the area. Mormons [farmed] the Fremont River valley in the 1880s...In addition to farming, lime was extracted from local limestone, and uranium was extracted early in the 20th century.