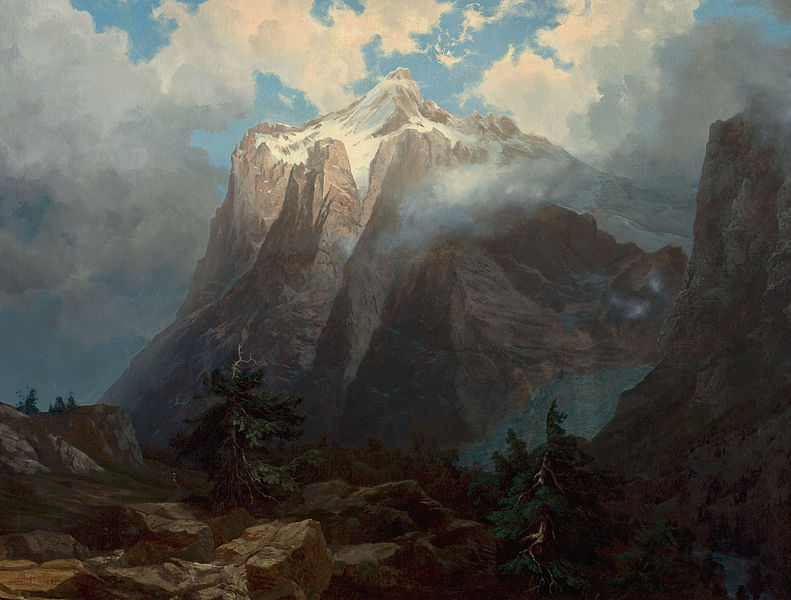 Kings Canyon, [located] in the southern Sierra Nevada [mountain range in California], is characterized by some of the steepest vertical relief in North America...The Great Western Divide extends through the south-central part of the park..,[and the peaks in this area include] Mount Brewer.  The canyon [itself] is a wide glacial valley featuring [not only] spectacular tall cliffs, [but also] a lovely meandering river, green vibrant meadows and beautiful waterfalls.

[Native Americans] have inhabited what is now Kings Canyon National Park for about 6,000–7,000 years, including the Paiute (Monache) and Yokuts peoples.  The native population suffered greatly after Europeans arrived in the 19th century, [for example:]  a smallpox epidemic killed off most of the Monache in 1862), and very few remain in the area today.  The early Spanish exploration of California largely bypassed what is now Kings Canyon National Park; [however,] in 1805 Gabriel Moraga led an expedition through the Central Valley and crossed what is now the Kings River, bestowing the name Rio de los Santo Reyes (River of the Holy Kings) on the stream.

During the 1860s, a road was built to Grant Grove and many of the sequoias there were logged. The first of several sawmills opened in 1862, and logging operations expanded north and almost entirely leveled Converse Basin, then one of the largest sequoia groves in the world...It was not until John Muir first visited in 1873 that Kings Canyon began receiving public attention. Muir was delighted at the canyon's similarity to Yosemite Valley, as it reinforced his theory that the valleys were carved by massive glaciers during the last Ice Age.  [Then,] on October 1, 1890...[during President Benjamin Harrison's administration] Congress passed a bill that established [several national parks including] General Grant national park [to preserve the giant Sequoia trees from logging].  In 1940, Congress and President Franklin D. Roosevelt created a new national park to include the glacially-formed splendor of Kings Canyon. The newly established Kings Canyon National Park subsumed [the Sequoia Groves of] General Grant National Park...Since the Second World War, Kings Canyon and Sequoia have been administered jointly.