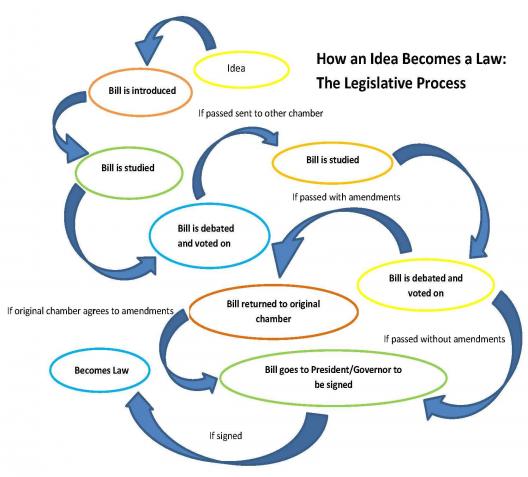 All laws start as an idea. An idea begins the legislative process as a bill, which can be introduced in either chamber of the Legislature.  In step one on its path to becoming a Law, the bill is studied.  Witnesses testify for and against it.  Information on the topic is gathered.  If it passes this initial scrutiny, the bill is sent to the full chamber to debate and vote on.  If it survives the debate and the vote, the bill next goes to other chamber and the process begins again.  If the second chamber makes changes to the contents of the bill, it goes back to the original chamber for a vote on the amended version.  This back and forth process continues until both chambers agree on exactly the same version.  The bill is then sent to the Executive Branch for signing.  If signed it becomes Law.

In the United States, this basic process is followed on all levels of government from the local to the national.  Other countries handle the process differently.