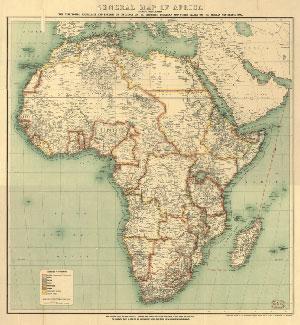 CRL and CAMP have collected more than 1,400 African newspapers on approximately 12,000 reels of microfilm. Coverage includes every country of Sub-Saharan Africa and spans from 1800 to the present. For additional details, consult the CRL catalog scope for newspapers [http://catalog.crl.edu/search~S3] and search by country.

Part of the World Newspaper Archive (a partnership of CRL libraries and Readex, a division of NewsBank), African Newspapers currently provides digital access to fully searchable African newspapers published between 1800 and 1925.

Records of the German Ministry for Colonial Affairs (Reichskolonialamt). CRL holds the complete set of the Reichskolonialamt microfilm set “R1001.” This set covers Akte 1-9788 of the archives, and contains information on colonial policy, affairs relating to the African colonies, economics and trade, land and forestry, foreign affairs, and command of the colonial force.  Catalog Record    [http://catalog.crl.edu/record=b2075815~S1]

Papers included are selected from House of Commons sessional and command papers for 1801 to 1899. The papers provide important source material for the history of the African continent during the period.

Contains statistics of judgments, reviews of court decisions, and administrative reports on divisional courts ("tribunaux des cercles") and sub-divisional courts regularly sent from interior posts to the colonial administration in Dakar, Senegal as part of a process of legal oversight and review.   Catalog Record [http://catalog.crl.edu/record=b1483510~S1]

Annual departmental reports relating to African countries prior to independence

See: Government Publications relating to African countries prior to independence.

Government Publications relating to African countries prior to independence

Records of the American Committee on Africa

The American Committee on Africa (ACOA), formed in 1953, supported campaigns of nonviolent protests against apartheid led by the African National Congress as well as other anticolonial struggles throughout the continent. Records in this series summarize the entire range of ACOA activities in America and abroad, including its lobbying, educational work and foreign student exchange programs, organization of boycotts, sponsoring of conferences, and development of an antiapartheid network within America. The Series consists of two parts:

This collection from the archives of the Société des missions évangéliques (founded 1822) includes incoming correspondence (1827–1947) from the missionary fields in Algeria, Cameroun, Congo-Gabon, Lesotho, Madagascar, Senegal, Togo and Zambia. This collection also contains the "Home Files" from the archives. These files contain outgoing correspondence, minutes (1822–1935) and reports (1833–1986) of the Society, including its Auxiliary Committees. It also contains records of the various Consultive Conferences (1900–31). CAMP collection.

Collected reports, interviews, political and trade union documents, and biographical files of important individuals and organizations in South Africa for the period 1964–90. Examples include the African National Congress, the Pan Africanist Congress, Inkatha, black consciousness organizations, and the United Democratic Front. Assembled in the process of writing From Protest to Challenge: A Documentary History of African Politics in South Africa 1882-1990.

This reprint edition is part of the Irish University Press series of British parliamentary papers. Selected from House of Commons sessional and command papers for 1801–99, these papers provide source material for the history of Africa of the period.

Collection of pamphlets at the Royal Commonwealth Society.

Correspondence and reports regarding the slave trade from British slave trade commissioners and naval officers worldwide. Files are divided chronologically and by category.

Slavery and Manumission Manuscripts of Timbuktu

Digitized versions of approximately 200 19th-century manuscripts (in Arabic) relating to slavery and manumission in Timbuktu. These provide documentation on Africans in slavery in Muslim societies.