In Motion: The African-American Migration Experience 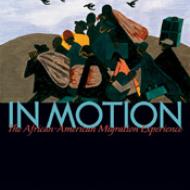 "In Motion: The African-American Migration Experience presents "For the first time in history all the components of the African Diaspora are gathered together. The United States is the only place, the present time the only time. African Americans, Africans, Afro-Caribbeans, Central Americans and South Americans of African descent, as well as Africans and Afro-Caribbeans born in Europe live side by side, each group bringing its specificities, culture, and sense of identity. The ethnic and cultural diversity of the black population has never been greater, and richer. And it is all part of the African-American migration experience. This site gives the opportunity to African descended peoples to trace their own histories and the histories of the other groups that form the African Diaspora. It is a resource for discovering their common and not-so-common histories and exploring future possibilities."

From In Motion: The African-American Migration Experience HomePage

Welcome to the African American and African Studies Research Site, your information gateway for research, teaching, and learning. Feel free to contact me for your research and classroom needs.

Afro-Americana Imprints, 1535-1922
Created from the Library Company's Afro-Americana Collection — an accumulation that began with Benjamin Franklin and steadily increased throughout its entire history, resource provides access to printed works including books, pamphlets and broadsides, and lesser-known imprints.

International Index to Black Periodicals (IIBP)
IIBP includes current and retrospective bibliographic citations and abstracts from scholarly and popular journals, newspapers and newsletters from the United States, Africa and the Caribbean. Coverage is global in scope and multidisciplinary, spanning cultural, economic, historical, religious, social, and political issues of vital importance to Africana Studies.

African American Odyssey
"The African American Odyssey: A Quest for Full Citizenship," highlights what is available in the Library of Congress' African American collection. Collection includes books, documents,films, images, manuscripts, maps, musical scores, plays, and recordings. Digital Collections include: The Frederick Douglass Papers at the Library of Congress, Jackie Robinson and Other Baseball Highlights, 1860s-1960s, Born in Slavery: Slave Narratives from the Federal Writers' Project, 1936-1938, From Slavery to Freedom: The African-American Pamphlet Collection, 1822-1909, and Slaves and the Courts, 1740-1860

Africa Bibliography
The Africa Bibliography is an authoritative guide to works in African studies published under the auspices of the International African Institute annually since 1984. This online consolidated version brings together every record collected since the bibliography's foundation, producing a rich and interactive resource for all scholars interested in the study of Africa