The Afro Archives and The Afro Newspaper Morgue Collections 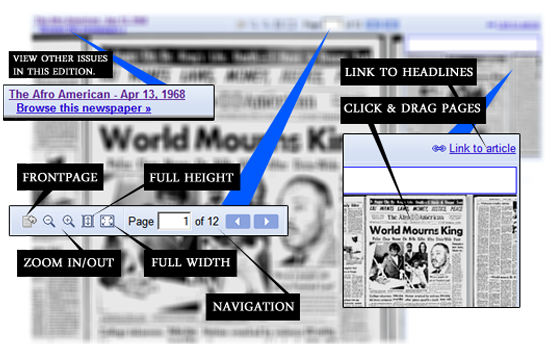 Welcome to the African American and African Studies Research Site, your information gateway for research, teaching, and learning. Feel free to contact me for your research and classroom needs.

African Newspapers, is part of the World Newspaper Archive, a partnership of College Research Libraries and Readex. Resource currently provides digital access to fully searchable African newspapers published between 1800 and 1925.

Coverage includes every country of Sub-Saharan Africa and spans from 1800 to the present.The Center for Research Libraries (CRL) and The Cooperative Africana Materials Project (CAMP) have collected more than 1,400 African newspapers on microform.

Provides access to newspaper pages from 1860-1922 and information about American newspapers published between 1690-present. Chronicling America is sponsored jointly by the National Endowment for the Humanities and the Library of Congress as part of the National Digital Newspaper Program (NDNP).